﻿Virtual Reality (VR) is an emerging technology that transports the user’s mind somewhere else. Because of its expense and complexity, VR is far from ubiquitous in current classrooms. Facebook’s Education Modernization team has partnered with Blue Trot, a research consultancy, to design and implement the first-of-its-kind social classroom activity. During the scenario, teams rotated in timed rounds as “designers” in the VR device while the remaining group members communicated instructions through design memos. Students created virtual field trips to Iran, New York, and San Francisco.

In AP Statistics, after the AP exam, students create and implement their own experiments. This student was very interested in athletic performance, so he decided to test the effect of caffeine on two types of athletic performance – endurance, and speed and agility.

He recruited his volunteers, divided them randomly into either the treatment or placebo groups, did and compared their baseline times against two types of activities while taking either the caffeinated or non-caffeinated drink.  He did these tests on different days to give everyone a chance to recover, and randomized the order of the days.

He expected that the caffeine would have a better effect on the speed and agility performance, but his results turned out to be statistically significant for endurance and not for speed and agility!  That finding emphasized the importance of being open to getting different results than anticipated, and then trying to think of explanations for why that might have happened. 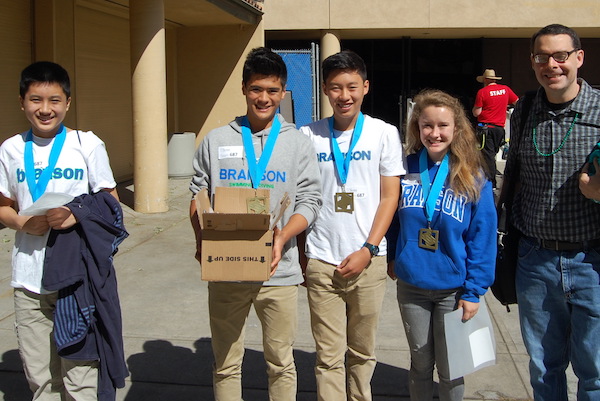 The Branson Bullworks tech challenge team won second place overall in the annual Tech Challenge 2017 Rock The Ravine sponsored by Dell. Benji Wu '20, Ray Kwei '20, Margot Mead '20,and James Zhao '19 competed against over 100 other teams in the 9-12th grade category. More than 2,500 students took part in the 30th annual challenge, which was held at the San Jose Technology and Innovation Museum.

Surveying as a Use of Trigonometry

Paul McCarthy took his Precalculus I class outside for a week to do some surveying--a great practical, real-world application of Trigonometry. We used an iPhone app called "Theodolite" to help measure angles and distances (using GPS positioning) to help determine the height and distance of remote objects (such as distant mountains and ridge lines). The students were then able to verify the answers given by the App using their own manual calculations and their knowledge of trigonometry. "We had a lot of fun and learned a useful application of math."

Python Programming students visited Telltale Game Design in San Rafael, where they learned from industry professionals about the creative process and principles of game design from end to end. Telltale is an award-winning independent developer and publisher of digital entertainment. They design story-based games that the user moves through and controls, including Batman, Guardians of the Galaxy, The Walking Dead, Game of Thrones, and Mindcraft.