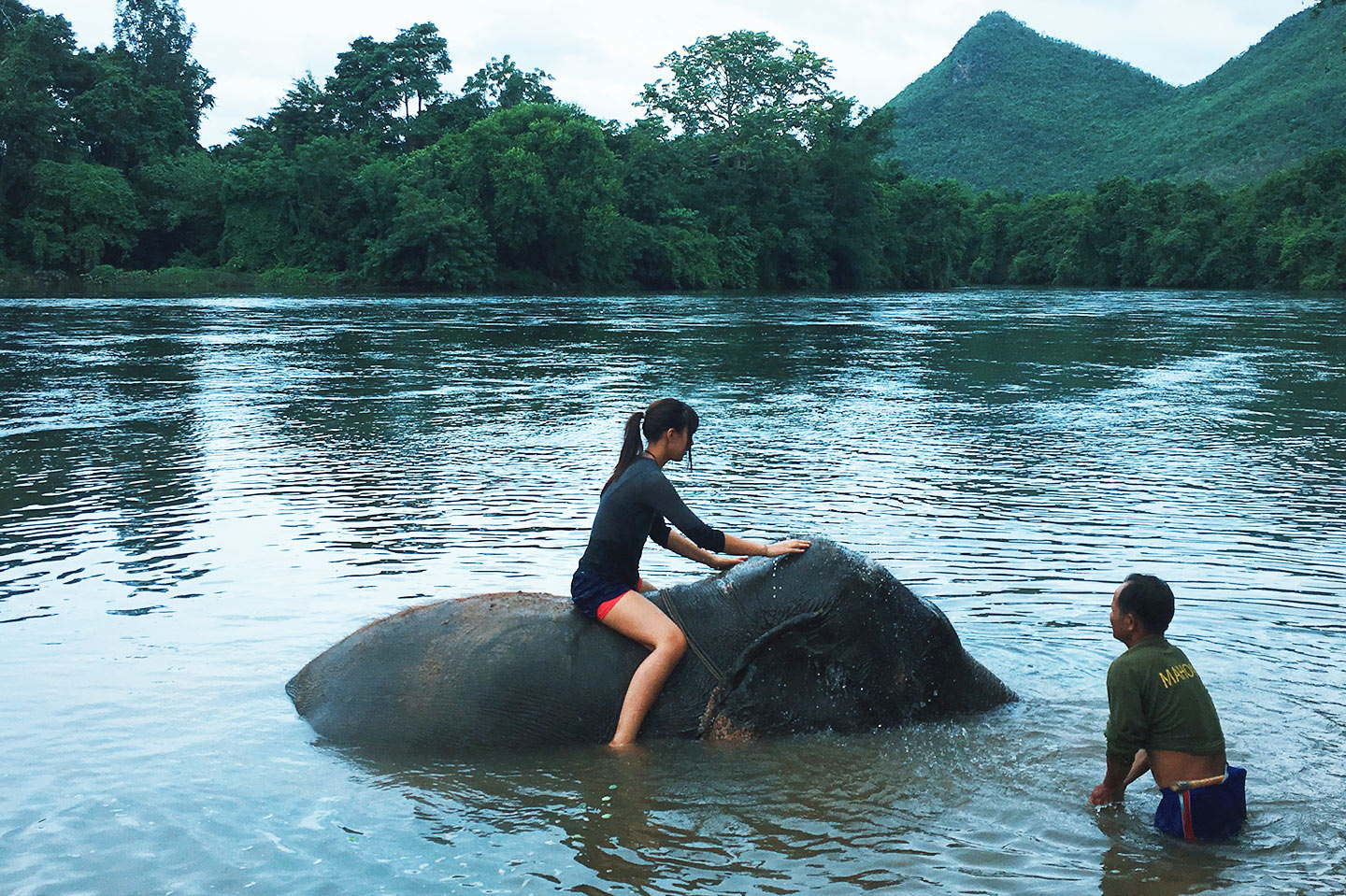 Volunteering at Elephant's World in Thailand

I volunteered at Elephant's World in Kanchanaburi, a province in northern Thailand, for 4.5 days, from July 2 to July 6. I was originally supposed to just help around the community, preparing food, cleaning up, and providing whatever the elephants needed just like the other volunteers. Surprisingly, there were only around three volunteers who actually spoke Thai, so the rest consisted of volunteers from all around the world. I befriended and shared stories with volunteers from Croatia, New Zealand, Russia, Spain, France, and the foreign Arizona. My mom only volunteered with me for the first day and then left me for the rest; she returned to her hotel but I was definitely glad to be where I was.

I was originally supposed to keep to those daily tasks. However, I was also one of the few people who could speak Thai, and not to mention I was the youngest volunteer (everyone else was in their early-mid-twenties). The mahouts were also around my age range and didn't mingle much with the volunteers since the majority didn't speak any Thai. Note: mahouts are basically a human companion to an elephant -- they train and take care of an elephant for the entirety of the animal's life, so they become very close and inseparable. The mahouts were/are the most respected people on the field, for only they could control the temperance and behavior of the elephants.

Because the mahouts were from the Thailand-Myanmar border, they spoke Thai with a very heavy accent that was difficult to understand. Still, however, I started speaking to a few in Thai and eventually befriended them... but there were two in particular that I stuck with. One boy was seventeen and the other was eighteen; while we were all a bit awkward and shy at first, that barrier quickly disappeared and we would joke, sing, and throw mud at each other in the river. While the volunteers were strict at first, they saw that I could communicate with the mahouts and therefore cut me slack -- I was free to be with them! I still worked cleaning around the place and preparing the elephant's food, but I was free to roam on my own and help with the mahouts since they don't usually have other visitors or volunteers to talk to. The two boys, their elephants, and I would meander down to the river and clean the elephants while having mud fights against each other.

Standing in the river, fully clothed and muddy from head to toe is one of my happiest moments. There was an unparalleled feeling of bliss and true happiness that I had never felt before -- it was just the three of us (and two elephants) laughing in the river, without a single dread of exams or college apps on my shoulders. (Picture attached).

By the end of the trip, I spent more time working with the mahouts than I did with the volunteers. I still loved all the volunteers, they were so kind to me, but I created a different and special connection with the mahouts. I felt a bit like a lucky odd-ball since I was technically not supposed to work with them, yet because there was no language barrier, I could be with them and take care of the elephants much more closely. It was one of the best experiences I've had in my life -- as corny as it sounds, it's true. I was invited to the mahout village where I spent a few hours talking to the cutest kid and some older mahouts' wives. I was called their daughter! It was a wonderful, wonderful experience. I miss it so much and will be going back next year for longer.You can can take courses through the Global Online Academy (GOA), participate in ongoing exchanges with a sister school in Taiwan and a school in Switzerland, or go on school-sponsored trips to explore new communities--human and animal--and work with local people and scientists while on those trips.

During a trip to Tanzania, students brought supplies to a high school, visited an animal orphanage, and went on safaris.

Latin teacher Henri de Marcellus and Italian teacher Gisella Petrone took a group of students to Italy, where they explored the ancient ruins of Rome, Ostia Antica and Verona; saw the artistic glories of the Vatican, and traveled the canals of Venice. Language students had a chance to practice Italian and Latin, but the trip was open to all Branson students.