We believe literary expression has the power to illuminate the human experience.

We investigate, explore, question, analyze, and fall in love with our literary texts every day. From Homer, from Shakespeare, from Dante to Frederick Douglass to Jhumpa Lahiri to Zadie Smith, students immerse themselves in vibrant, diverse worlds. Our literature serves both as a mirror for our students and a window to the wider experience.

We hope to offer all our students, regardless of identity, the pleasure and value of seeing themselves reflected in the texts they read, and to learn, with empathy and compassion, about cultures and experiences rarely explored.

In our innovative classes, we use a wide array of assessment strategies: multimedia presentations, design thinking, collaborative projects, dramatic presentations, and more.

What is most important: we teach students that the essential art of writing is more than “thesis, evidence, analysis.” It is an ongoing conversation between ourselves, the text, and our audience. Writing engenders epiphany both through the strength of language and the clarity of vision.

Reconstructing Myth
How do classical myths change when the narrator changes? How do we reconcile different versions of the same story? If a myth can change so much from narrator to narrator, is there such a thing as one “true” rendering of a fictional story, and is it fair or useful to argue that one rendering is more true than another? In Reconstructing Myth, students will compare different renditions of classical myths to explore how different narrators construct the same stories. We will explore how a narrator’s identity shapes what she pays attention to, and we will consider the impact of translation on meaning. Texts may include: excerpts of both Robert Fagles’ and Emily Wilson’s translations of Homer’s The Odyssey, Madeline Miller’s Circe, Margaret Atwood’s The Penelopiad, Ovid’s Metamorphoses, Zachary Mason’s Metamorphica, Sophocles’ Antigone, and Kamila Shamsie’s Home Fire. Students will synthesize their findings in critical essays, a personal narrative essay, and a creative reconstruction of a myth of choice.

Reimagining the Self
In this course students explore the formation of identity through family, culture, and politics, especially under the conditions of modern and postmodern worlds. We will examine the role of each of these forces in shaping how characters begin to understand both themselves and the worlds they find themselves in. The course looks especially at definitions of the self in the post-industrial, so-called “Information Age.” In a world dominated by social media, the spectacle of the global economy, and materialism as a defining goal, how do we, both as individuals and as a larger society, begin to find spaces where meaningful interaction is possible? In the Information Age are such spaces possible, even desirable? Readings may include: Kazuo Ishiguro’s A Pale View of Hills and Never Let Me Go; Sayaka Murata’s Convenience Store Woman; Haruki Murakami’s Hard-Boiled Wonderland and the End of the World and The Wind-Up Bird Chronicle. Essay assignments require close reading, analysis, reflection, creativity, and attention to matters of grammar and style.

African-American Biography
At the center of American Literature lies the insights and calls to action of African-American artists, and at the center of that movement is the autobiographical form. Beginning with Frederick Douglass, African-American artists have used their lives as a text to analyze and in so doing have offered the most insightful narrative yet composed into what it means to be (and what it means to be denied being) an American. This course will look at the history and framework of African-American autobiography, culminating with a reading of Toni Morrison’s Song Of Solomon as a way of understanding how this literary history impacts all African-American artists and art. Students will write analytical essays, self-reflective pieces, write to one another in an online forum, and design and present a final project. Texts may include: Harriet Jacobs—Incidents in the Life Of A Slave Girl (Summer), Excerpts from Booker T. Washington and W.E.B. Du Bois, The Autobiography Of Malcolm X, Toni Morrison—Song Of Solomon.

Immigrant Stories
For a country built by an immigrant population, the United States can be a challenging place for newly arrived peoples. Many times, things are better here than in an immigrant’s homeland, though that doesn’t mean things are right here. By examining the stories of immigrants (often told by authors who are immigrants themselves), we will come to a better understanding of the opportunities and challenges presented by immigrating and attempting to acclimate to the United States. Essential questions discussed in class include: How does one become an “American”? Why is it important to maintain a sense of one’s culture, and why can it be difficult to do so in the United States? What happens when oppressive elements of one's ethnic culture come up against progressive elements in American culture? And how can an outsider best find acceptance and peace with a larger community? Texts may include How the Garcia Girls Lost Their Accents, Interpreter of Maladies, The Brief Wondrous Life of Oscar Wao, The Beautiful Things that Heaven Bears, and No-No Boy. Student essays will require close analysis of text and attention to matters of grammar and style.

American Transcendentalism
This course focuses on an undergirding principle of American literature: defining the individual’s relationship to the collective. The works studied deal with the struggle to be independent of society’s influence while maintaining its acceptance and respect—particularly in the face of gendered and racial hegemony. They illustrate the depth to which Transcendentalism has permeated the American consciousness, and the longevity with which it continues to inform our culture. Texts may include: There, There, The Scarlet Letter and Their Eyes Were Watching God, the seminal essays Self-Reliance and Civil Disobedience, as well as the play A Soldier’s Story and selected works of Kanye West, Chance the Rapper, and the Chicago Footwork scene. Students will hone their writing skills through a balance of analytical and creative compositions and the regular study of grammar and vocabulary, organizing bold, authoritative arguments and personal narratives.

Graphic Novels
Long derided as being neither literature nor art, the medium of comics and the graphic novel, with its complex juxtapositions of word and image, is increasingly esteemed by modern scholars as a sophisticated mode of communication and expression. This course will simultaneously explore the aesthetic and historical parameters of the medium as well as the unique ability of this medium to express the experience of the outsider, and it will be necessarily interdisciplinary in its scope. We will consider the flexibility of the medium by looking broadly at its form -- superheroes, satire, autobiography -- as well as experimental and underground iterations and its crossover with the medium of film. Readings may include two longer novels by Art Spiegelman and Alison Bechdel, and Gene Yang, and many shorter works and excerpts by comic and graphic artists. Students will learn to analyze and deconstruct visual images and narratives in conjunction with text through analytical writing and discussion.

Encountering Beauty
This is a literature course that examines society’s definitions of how we decide who and what is beautiful. In this course, we will read and discuss literature that positions beauty as subjective and challenges normative modes of aesthetics. What are the constructs that determine what is beautiful in humanity? How can we work to deconstruct unhealthy definitions of beauty and to challenge the very systems that dictate our choices? We will read texts that grapple with beauty through the socially constructed lenses of race, gender, and ability. Through diverse narratives we can critique beauty’s influence on power and status. Together we will begin to confront our own known and unknown biases and work together to reconstruct new ways of knowing ourselves and others. We will talk about ways in which society reinforces ideas of beauty to determine what matters and why. Texts may include: Toni Morrison’s The Bluest Eye, Vladimir Nabokov’s Lolita, Zadie Smith’s On Beauty, and selections from Beauty is Verb: New Poetry of Disability by Sheila Black, and others. Writing assignments will include literary analysis with close reading of a text, personal essay writing, and creative responses.

Shakespeare and the 21st Century
William Shakespeare has famously been called “the inventor of the human” by Harold Bloom. In this course, students examine both the human and the social as a means for re-examining themselves, and thinking through the current pandemics that we find ourselves confronted by in the current historical moment: Covid-19, racial injustice, environmental catastrophe. Through looking at plays like The Tempest, Othello, Much Ado About Nothing and Anthony and Cleopatra, the class challenges students to reevaluate their place in the world, and the place of institutions that we accept as social givens. The idea is to read Shakespeare not only through an intellectual but also through a social and emotional lens in order to better understand how we have come to this place as a society and a culture, and how we might move forward. Essay assignments require close reading, analysis, reflection, creativity, and attention to matters of grammar and style, and there will also be opportunities for personal writing, reflection and a larger project. 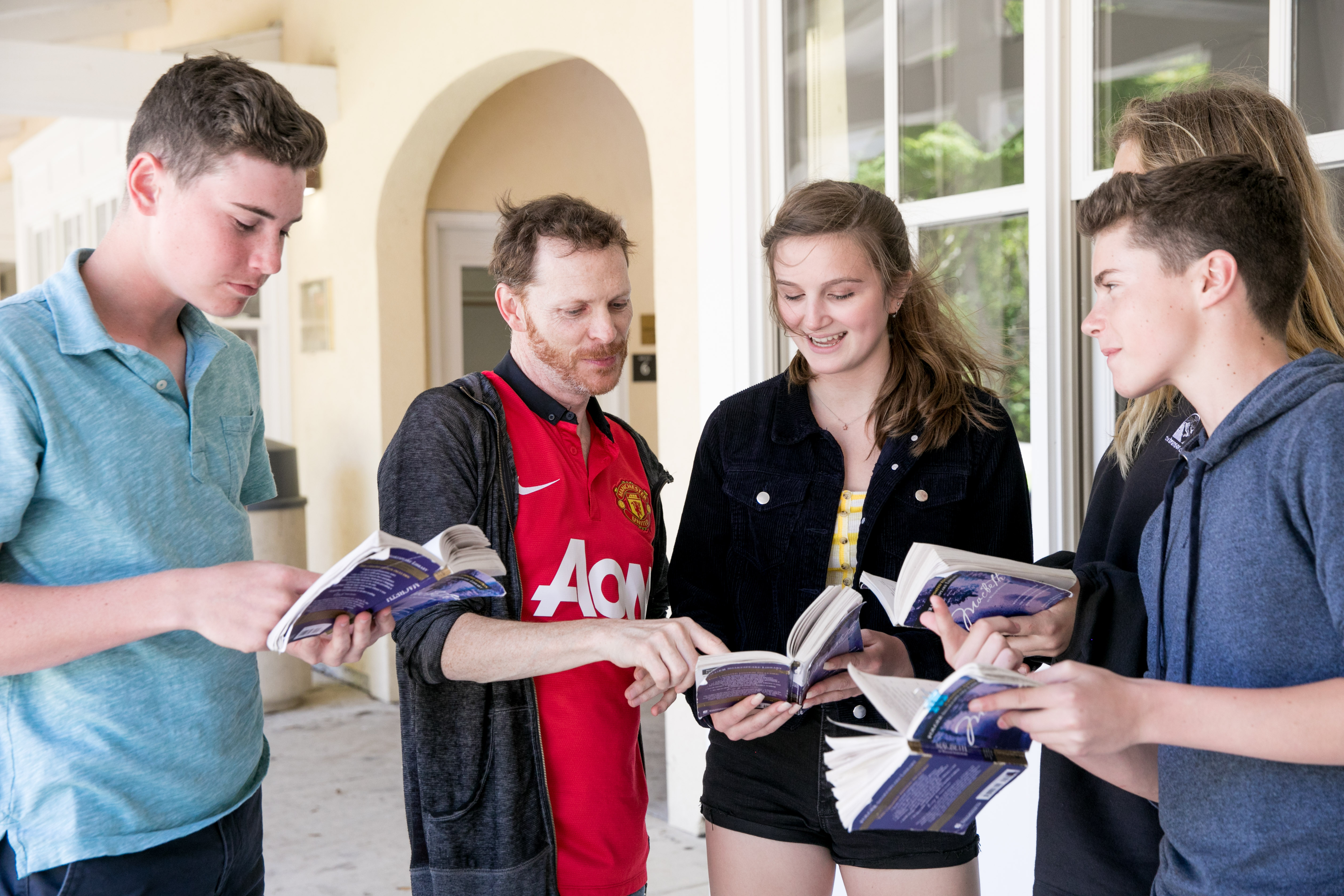