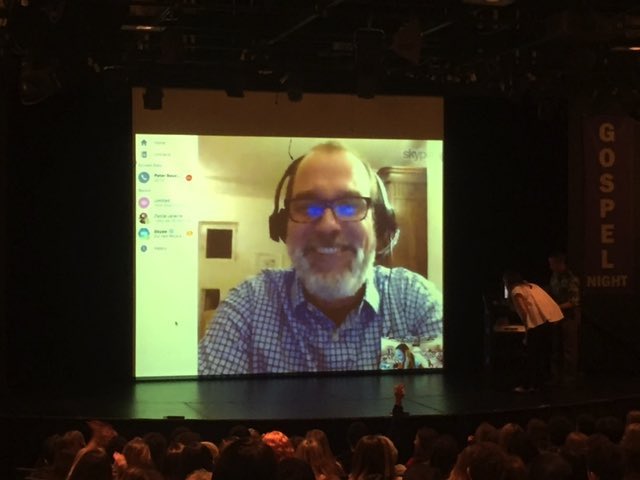 In February of 2017 at a special assembly, Alumni Council President Steve Fletcher '85 (father of Charlotte '20) joined Distinguished Alumni Committee Chairs Kat Mindel Jones '00 and Grace Caulfield '87 in honoring Peter Bouckaert ‘89 with the Distinguished Alumni Award for 2017. Because he is based in Europe, Peter joined the assembly via Skype, and his parents Christine and Joseph Bouckaert were present to accept the actual award for him. Before he joined us, we saw the preview of the Netflix documentary E-Team, which follows Peter and his team as they work in Syria and Libya.

A Belgian-born Stanford Law School graduate specializing in the laws of war, Peter has reported on the major wars and conflicts over the past 20 years. He is currently Director of Emergencies for Human Rights Watch, where he is responsible for coordinating the organization’s response to major wars and other human rights crises.

"When everyone is trying to get out of a place, we’re the people who go in and try to stop the atrocities,"

he explains of his work. The group conducts research. They were the ones who proved the chemical weapons used in Syria were not from the opposition, but from the government. "

"I believe my work isn’t just writing reports, but about trying to save lives."

When asked about the influence Branson had on his life and work, Peter said, "I still feel very connected to Branson and the many wonderful teachers like Mr. Honick." Peter came to the US at 15 without knowing English and struggled in two high schools before coming to Branson. He said he was thankful for the chance they gave him.

"I use a whole set of skills that I started to develop at this school. One of the takeaways was what I learned from the Branson motto 'Truth is beauty, beauty is truth.' My work isn’t about establishing the truth of what’s happening in these parts of the world."

Peter urged students to make a difference in whatever areas they feel passionate about.

"The beauty of getting a prime education is that it gives you the freedom to do what you dream of doing. This was my dream--to work in conflict zones and help people in these difficult situations. I wake up happy every morning and am excited to be doing my work."

In-person classes and all campus activities will resume on Tuesday, October 27 (on the Tuesday schedule). In-person learning will continue on Wednesday (on the Monday schedule), and the rest of the week as usual.