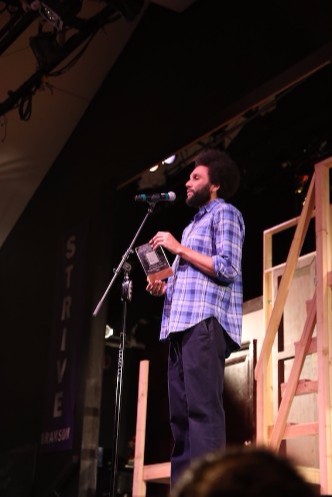 Poet and activist Tongo Eisen-Martin '98, accepted his award at a school assembly, at which he delivered two of poems from his collection, Somebody's Dead Already.
He praised the teachers who supported him at Branson, saying several times,
"Education is an act of love."

In closing, he encouraged students to forge their own paths to making change. “You can choose what you can do to do right by human beings. I do what I believe in for the benefit of others. Everybody in this room can definitely do that.”

Tongo’s work as a poet is described as “Unapologetic and unrelenting, he confronts the ugliness of injustice, politics, power structures, and survival with fierceness and love”.

As an educator, he was adjunct faculty at the Institute for Research in African-American Studies at Columbia University in New York. He is currently teaching a class at Mills College in Oakland.

As an activist, he has organized against the inescapable reality of the mass incarceration, police violence, and extra-judicial killings that target Black people and people of color throughout the United States.