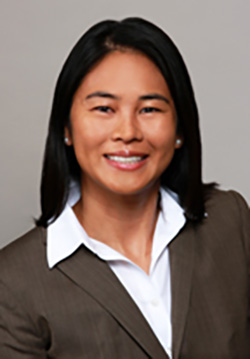 Louani Bascara is a 1998 graduate of The Branson School. As a student athlete at Branson, she helped the girls varsity tennis team claim four consecutive BCL championships under Coach Ed Chavez and captured four NCS tennis titles, two each in singles and doubles. She also competed on the girls cross country team, including as a member of the 1994 state-qualifying team, and excelled at badminton, winning the 1997 BCL girls’ singles title. Arguably, some of Louani’s greatest athletic contributions came from the sidelines, cheering on classmates during a brief stint as the Branson Bull.

Building on her on-court successes at Branson, Louani, a three-time letter winner at the University of Pennsylvania and Academic All-Ivy honoree, helped Penn claim its first-ever Ivy League championship in women’s tennis in 2001. Since then, Louani has participated in several marathons and triathlons, completing her first Ironman in 2016. She has volunteered for organizations that aim to increase the inclusivity of people of all abilities in endurance races. She currently resides in Alexandria, Virginia, with her husband and two dogs and works as an attorney for the federal government in Washington, DC.