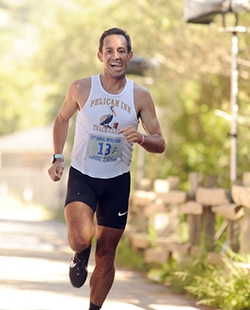 Alex Varner is a 2003 graduate of The Branson School. At Branson, he qualified for the California state cross country meet three times and, as a junior, led the boy's team to its first-ever state berth. He also played baseball and basketball during his first several years at Branson before concentrating solely on running his senior year.

Following his career at Branson, Alex continued running at Davidson College, where he competed in cross country, indoor track, and outdoor track until he graduated in 2007. He has had continued success in recent years, winning the Fastest Time Award at The Dipsea Race six times in a row, and seven times total. He has finished as high as second at the Dipsea as well. He has won the Double Dipsea three times and the Quad Dipsea once and holds the course records at both races. He has finished in the top 30 at both the Boston Marathon (2013) and the New York Marathon (2014). He has also run several ultra-marathons (races longer than 26 miles). Most notably, he finished 7th at the 2014 Western States Endurance Run (100 miles) and won the 2015 Lake Sonoma 50-Mile in a then course-record time of 6 hours 9 minutes. He has also been twice selected to represent the USA at the IAU Ultra Trail World Championships (2015 in France and 2016 in Portugal). He currently lives in Mill Valley with his wife and daughter and does research for a money management firm.